U.S. consumers are turning to digital sources for insurance quotes and other information, but still prefer personal contact with agents when purchasing insurance products, according to an Accenture survey of more than 4,000 U.S. automobile and home insurance customers.

The major findings include:
–Nearly three-quarters (76 percent) of consumers express a preference
for setting up and paying for their auto and home insurance policies in
person with an agent, and more than half (58 percent) indicate a
preference for doing so via the Web.
— When asked where they prefer to obtain quotes, 43 percent of respondents
choose websites, while 26 percent choose over the phone and 26 percent in
person. A much smaller percentage (four percent) chooses mobile
applications.
— Almost three-quarters (72 percent) of respondents also express a
preference for getting information about products and prices from an
insurer’s website. Exclusive insurance agents rank third with 56 percent
of respondents, behind friends and family, cited by 61 percent of
respondents. Search engines and aggregators rank fourth and fifth at 55
and 54 percent with respondents, respectively.
Also according to the survey:
“Much has been written about young consumers — with their strong propensity for Internet, social media and mobile — fundamentally changing insurance distribution,” said Sandquist. “Our survey reveals that many young consumers desire personalized advice and are willing to pay more for it — and a significant percentage prefers to obtain their quotes face-to-face. There are many demographic, psychographic, lifestyle and other factors which can account for differences in how customers would like to be treated. Some customers make decisions almost exclusively on price while others seek the best advice available, and this is not consistent by age groups. More sophisticated digital marketing, customer segmentation and analytics are needed to attract customers and deliver more personalized and relevant products and experiences.”
Insurers have opportunity to build customer loyalty and establish differentiation. Among the survey’s other findings:
Methodology
Accenture conducted a quantitative online consumer survey of 4,067 individuals in the United States, with 2031 answering the questionnaire regarding auto insurance and 2036 answering regarding home insurance. Samples were representative of gender, age, and income as well as regions. Interviews were conducted in August, 2012.
[article sources]
Learn More

The Five Star Award of Distinction is awarded by The Massachusetts Association of Insurance Agents (MAIA) to an independent insurance agency that successfully completes a “fitness review” which examines an agency’s five key imperatives: Customer Focus, Management/Leadership Excellence, Human Resource Excellence, Process & Product Excellence and Future Success.
“There are four things that can make a great agency and they are:  An owner who models the desired behavior and truly cares about the staff, customers and community. A management team that has unique skills and strengths that compliments the owners and that can align everyone in the agency to move forward in the direction that has been set for them. A staff that is a good blend of experienced individuals and younger people who work together with strong skill sets and capabilities and do their best to pursue the desired results, and a passion by everyone to do what is best for their customers, both in services and sales. Fair & Yeager has all of these qualities and is greatly deserving of its Five Star Agency Designation.” said Frank Mancini, President and CEO of MAIA.
“Having the Five Star Agency Designation is important to us.  It has helped us grow and improve and pushes us to continually strive to be better.  Continuous improvement in all areas is what we focus on.  I am lucky that we have the staff that we do because they are always striving to make sure that Fair & Yeager remains a Five Star quality agency to our customers.” said Artie Fair, owner of Fair & Yeager Insurance.
Currently there are only 28 Independent Agencies in Massachusetts and Rhode Island that have received the coveted Five Star Agency Designation.
Learn More 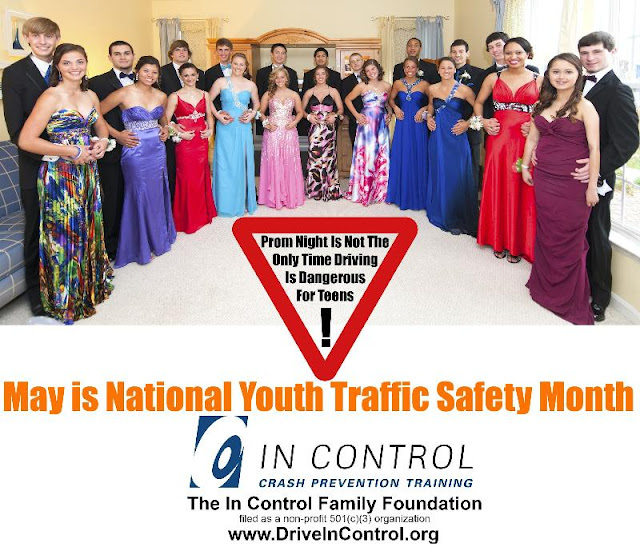 While May has the distinction of being National Youth Traffic Safety Month it also serves as the start of the most dangerous driving season for teens.
As warm weather continues and schools wrap up for the year, car stereos go up, windows come down and safe driving can take a back seat.
Teens: Keep an eye on each other and help your friends avoid dangerous behavior.
Parents: Don’t forget that driving is the most dangerous thing we do. Model the right behavior and recognize that inexperience, a lack of skills and the air of invincibility are a dangerous combination out on are roads.
Our crash prevention training really can help you, your teen or your teen’s friends avoid the unthinkable. Please consider training with us if you have not already or sharing this thought with friends & family.
Gift certificates make great graduation gifts too!
Over the next few weeks you may see In Control on TV, hear us in radio interviews or read quotes from us in newspapers and magazines.  We are always excited to help get the word out about safe driving, but we recognize that we could never have graduated 25,000 students without your recommendations to friends and family.
THANK YOU!
If there is anything special we could do in your community to touch more families, please do not hesitate to contact us.
Learn More
Page 16 of 34« First«...10...1415161718...30...»Last »